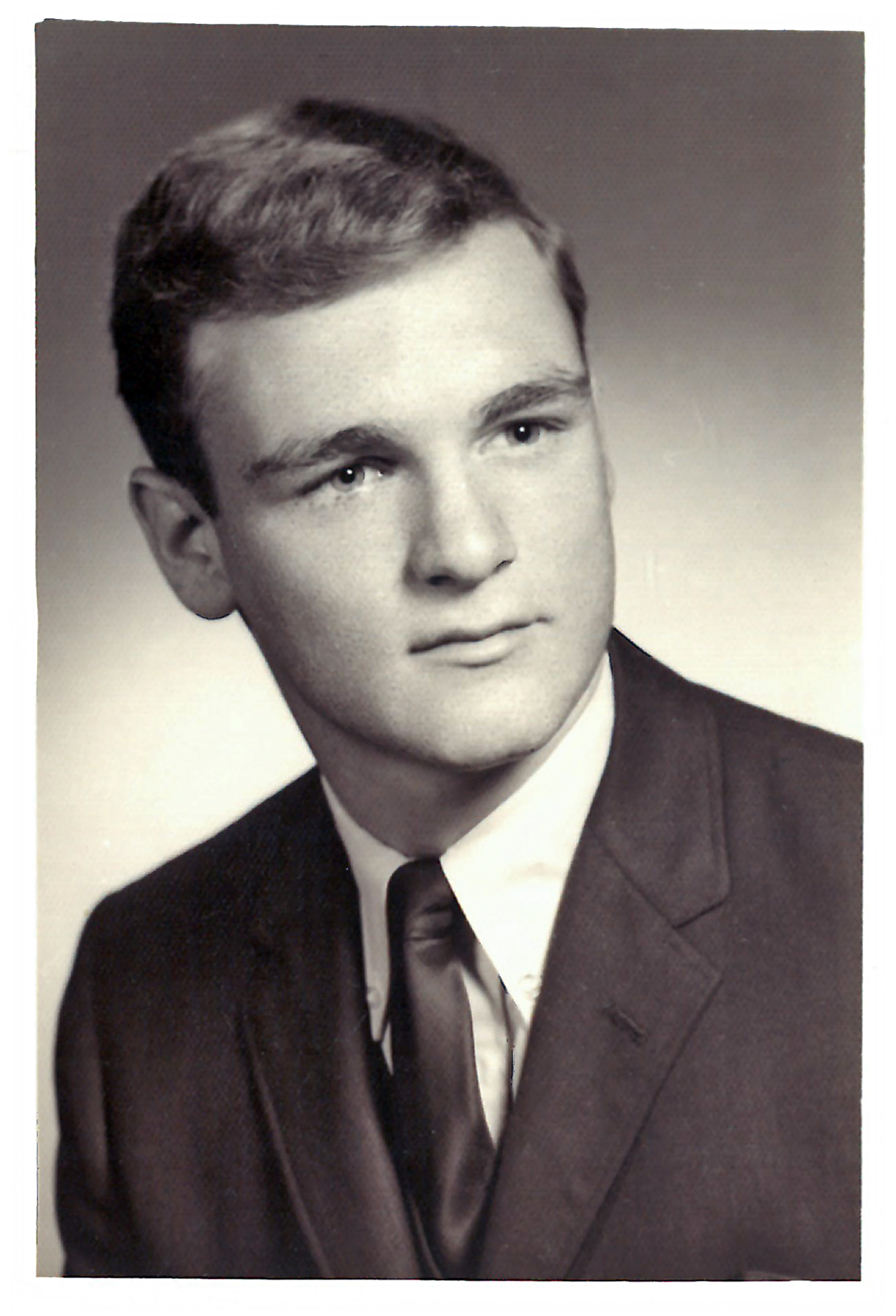 Joe Regalbuto is a Brooklyn-born actor and director; he co-stars in the revival of Murphy Brown with Candice Bergen.

“Let’s play guns!” There were giant mounds of dirt on Mabie Street in New Milford, New Jersey. It was 1955. What was once a farm was now being turned to a middle-class housing development. My immigrant father had moved our family of seven out of the Bronx to a better life in the suburbs. A good place for a 6-year-old kid to run around play baseball, football, and guns. Like so many families back then it was a new start in a better place. The future was bright, there were kids my age all over the place. We were happy and living on Mabie Street, USA.

We took sticks, toy guns, pistols, shotguns, machine guns, derringers, Lugers, water guns, and an occasional rubber Bowie knife, and we spent the day playing…guns. There were rules. You couldn’t just go shooting guys. When my friend Barry’s father was laying down the rules for the upcoming engagement (dads played too), he’d explain: “If you can see even part of the guy’s head and you point your gun and yell, ‘DA! DA! DA! YOU’RE DEAD!’ Then you are dead! No arguing!” Kind of final but we got the point: if you’re dead, you’re dead. That was a fixed rule. No exceptions. Kinda like life. Except you could get up again for the next battle.

In 1960, my oldest sister, Marianne became a young Democrat. JFK was running. My Italian Catholic family was beside itself with excitement. At Sunday mass, Monsignor Curry, ordered all Catholics to vote for Kennedy. It would be a sin not to. Kennedy was our guy. He played football and swam a hundred miles to save his buddies on PT 109.

JFK was coming to the Teaneck Armory, just a couple miles from us and the entire family was going to see him. I’m behind a rope at the armory with thousands of people. I look down a broad driveway and a giant convertible comes around the corner. The crowd breaks through the ropes to surround his car. I’m 10. People are going nuts. They finally clear the crowd. The great man is coming my way. At last, he gets to me. I wave. He looks me right in the eye, smiles, and waves back. He knew me… he said hello just to me. Three years later he was shot dead. Dead is dead. There was no arguing. He would not get up again.

I didn’t leave the TV those three days in November ‘63. I saw Oswald get shot dead by Ruby on TV. Saw the riderless horse leading the funeral parade, saw that beautiful little boy salute his daddy and Jackie lighting the eternal flame. I believe those events forever changed me. Took away my confidence, my security, and my invincibility.

When I started high school in 1963, no one had heard of Vietnam. By graduation in ‘67 it was a different story. More than 11,000 guys died that year, most of them were 19, 20, 21. Kids. By the end of 1968, 16,592 more would die. Back home there were marches, and cities burning, and Panthers, and lynchings, and Ali. Students were protesting and getting beat up in the streets, some died. Then Martin Luther King and Bobby Kennedy get shot. What the hell is going on?

There was no draft lottery yet but lots of talk of one. Nobody wanted to go to wherever the hell Vietnam was. We were kids. We just got our letter in football! Then in December of 1969, Congress thought a draft lottery would be a good idea. I end up No. 36. This couldn’t be possible. I met Kennedy for God’s sake. How can this be? 36. I’m dead.

What now? My only hope is my terrible hay fever. My sniffling and sneezing would be dangerous to the troops. My older brother escaped just months earlier by going completely nuts at the draft board. They classified him 4F. Unsuitable for war. I could try that but I was never as good an actor as my brother. Things had changed considerably at the draft since my brother’s award-winning 4F performance. No more BS. You could be bleeding from the eyes and you were going in. No escape. I was completely trapped. I just wanted to go home, lean on my Mom’s shoulder and watch TV with her like I used to. How am I gonna get out of this mess?

Sometime during my physical, I heard two words that changed everything. Conscientious Objector. All I have to do is explain my position in writing, have a personal interview with the Selective Service Board and convince them that I should not be in Vietnam with everyone else. My appointment day with the draft board came quickly. When I went into the small office in Hackensack, a kind-looking man probably in his 40s was behind a desk. He had my file in front of him including my epic essay on why I shouldn’t fight in Vietnam. This is the man who would decide my fate.

“We’ve all killed and been killed many times in our past lives!” I said. Oh Lord, this can’t be going well, did I just talk about past lives? Boot camp here I come!I continued, “We have been killing each other since the beginning of time. We don’t learn anything, and our Karmic burden on this planet gets worse and worse.” Then finally: ”I can’t in good conscience continue this endless cycle of killing boys my own age and collecting more bad Karma. My load is too heavy as it is.” The man looks at me… and says… ”Karma”… then after what seemed like forever… “I’m gonna put this through. You have six weeks to find alternative service. Good luck!”

Almost 50 years have passed since that karmic day in Hackensack, and by any measure, I’ve had plenty of good luck. I found my alternative service at NYU medical library working in the stacks. That’s right, I was putting med students’ library books back on their shelves. I found a small room in Astoria, Queens, to live in, complete with a hot plate and toilet in the hall. Not fancy but a lot better than living in the jungle in Vietnam and getting shot at every day.

It’s 2019, and I’m back here in Astoria. I knew about the old Paramount studios that were just a few blocks away from my luxurious 32nd Avenue Astoria address back then. They made 90 films there in the 1920s, with people like Valentino, The Gish sisters, W.C Fields, and the Marx Brothers. Now Murphy Brown, a show I first filmed with Candice Bergen in the 1990s, released the first season of a reboot, made at the Kaufman Astoria Studios.

And we’re dealing much of the same national madness and division that sent me to Astoria as a 20-year-old. Being here, how could I not be reminded of the guys born on August 24, 1949 who never heard of Alternative Service. Didn’t meet a kind draft board guy. Had no clue they could object. And never saw their moms again. I’m so sorry. We were all just scared little boys. I got the chance to grow up marry the gorgeous woman I’ve loved for 46 years, and have three kids of my own. They didn’t.

It feels like the world is falling off its axis again. Kids are still killing each other in some war or other. African Americans continue to be shot in the streets. People in power hurl nasty nicknames. Nazis have crawled back out from under their rocks. And anger infuses every public space. People say that they have not seen anything like this in their lifetimes. But if you’re my age, you have seen this madness before. And that’s scary. Where are we heading? What will my four beautiful grandkids have to face? Will some leader ask them to pick up a rifle and go kill somebody else’s grandkids in a war somewhere? Sadly, history tells us that might be the case.

Our little ones will discover the terrible things we do to each other on this planet soon enough. They don’t need to learn any pre-school war games from grandpa. So I’ll teach them a different game. There will be no talk of guns. When they find big dirt hills, like the ones we had on Mabie Street, they can play on them as much as they want. And there are still rules: You can climb up the hills and run down them as fast as you can. You can play a lot of stupid but very funny games. You can build huts with speakers and WiFi, get filthy dirty, laugh till you’re breathless, and then go home to mom for cookies and milk. Rules are rules. No arguing. Because what’s the point of any game unless you get to go home at the end?

The original version of this story misstated whether there was a military draft before 1969. There was a process for conscripting men into military service, but not a draft lottery.