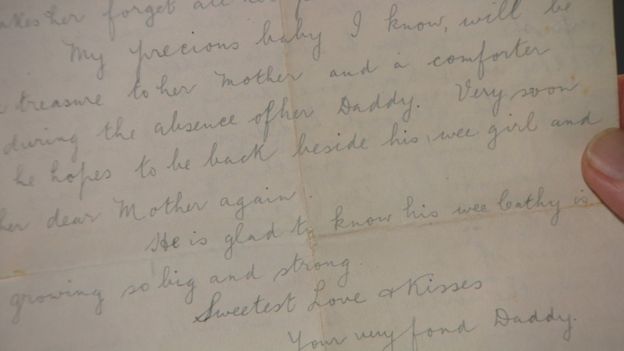 In the centenary year of the end of World War One, much of the focus has commemorated the heroes of the battlefield. But not every man was prepared to take up arms and fight. The plight of the conscientious objectors - those who refused to go to war - is highlighted in a poignant letter gifted to Glasgow Caledonian University. Thousands of letters were written home from the front line, but the one now on display was penned by a Scot in a Labour camp in Argyll, to his baby daughter.

Robert Climie wrote to his young daughter Cathy in November 1917. What was then called the Great War had less than a year to run, although no-one at the time could have any confidence of that. The conflict which had taken millions of men from their homes to the battlefield had brought the idealistic Robert Climie to Wormwood Scrubs and Wakefield Prison before the harsh conditions of work in the forests of Argyll. His letter can be seen at the university as the centenary of the Armistice approaches. A personal message from Robert, a postal worker from Kilmarnock, it also reveals the story of Scotland's pacifist movement, and the plight of an estimated 1,400 conscientious objectors. Robert Climie was a committed socialist, and a member of the No Conscription Fellowship, which had substantial support in the west of Scotland. The son of a prominent trade union leader and one of the pioneers of the Independent Labour Party, he was fiercely opposed to the Great War. When conscription was introduced in 1916, calling all fit men aged between 18 and 40 for military service, Robert exercised his right to appeal as a conscientious objector.

He was ordered to appear before a military tribunal, and convinced the tribunal to grant exemption from service and allow him to continue in his job with the Post Office. But one of the members of the tribunal, a retired army officer, took exception to the decision, and made strenuous efforts to overturn it. He succeeded.

In January 1917, Robert was arrested, court martialled and sent to Wormwood Scrubs in London. Later he was transferred to Wakefield Prison, and in the spring he was moved to a labour camp at Cruachan in Argyll. He was one of around a dozen conscientious objectors despatched to the Cruachan Estate around Loch Awe. Conditions were harsh. He was there for almost a year. It was there that he penned the letter to the baby girl he had known for only the first few months of her life. He wanted to mark Cathy's first birthday. He wanted her, in later life, to have some understanding of his decision.

Robert had married his childhood sweetheart Kate a year after the war started. They were both active in the labour movement and helped organise Socialist Sunday Schools for children. Robert Duncan, an author and historian at Glasgow Caledonian University, says those who refused the call to arms were tried in military courts, and usually sentenced to imprisonment or forced labour for taking a stance.

He said: "There was a very common misconception about conscientious objectors. The prevailing one was that they were shirkers, they were cowards, unmanly, and they were in that sense, despised. But the evidence is totally contrary. They were principled men who knew what they were doing and suffered the consequences for the stand that they took".

The heartrending letter from a father to his daughter - separated by 100 miles but a world apart - were gifted to the university by Robert Climie's family and are on display to highlight the plight of the Great War's conscientious objectors. Archivist Carol McCallum feels it is important history records another aspect of the war, and the part it played in the lives of many families. "I think every time I have read the letter, I've cried", she said. "Lots of stories in the archive should be told. Archives are just the story of people. All of a sudden, this person stood out and I decided we really had to pursue telling the story of the conscientious objector in a different way that maybe will hit home at people sitting having their tea.

She added: " People might say 'Gosh, I never thought about it. I never thought about a mother, without any social security or anything to help feed this child, had to bring up their child and a child had to be without her father because of something he believes in'. Robert Climie's carefully written words to his beloved daughter are a moving and profound reminder that not all heroes went to the battlefield. In his closing words he says he knows she will be a comfort to her mother in the absence of her daddy. Very soon he hopes to be back "beside his wee girl and her dear mother again". The letter was donated to Glasgow Caledonian University by the Climie family, along with memorabilia and photographs from the pacifist movement. At the Argyll labour camp, Robert Climie befriended a fellow pacifist called Alex Stewart who he kept in touch with following the war. Cathy went on to marry Alex's son - who she supported when he became a conscientious objector in the World War Two. It is their son who now wishes his grandfather Robert's story to be remembered.