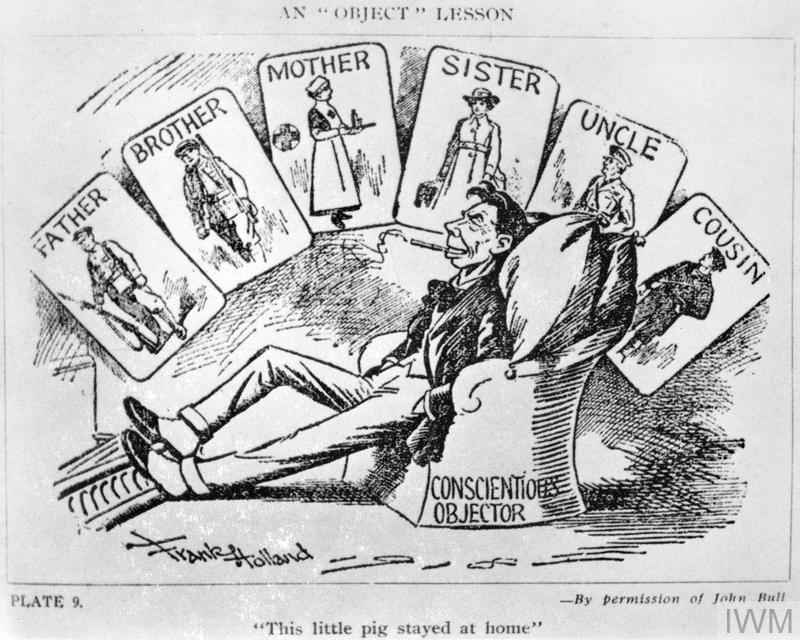 Before the First World War there had never been compulsory military service in Britain. The first Military Service Bill was passed into law in January 1916 following the failure of recruitment schemes to gain sufficient volunteers in 1914 and 1915. From March 1916, military service was compulsory for all single men in England, Scotland and Wales aged 18 to 41, except those who were in jobs essential to the war effort, the sole support of dependents, medically unfit, or ‘those who could show a conscientious objection’. This later clause was a significant British response that defused opposition to conscription. Further military service laws included married men, tightened occupational exemptions and raised the age limit to 50.

There were approximately 16,000 British men on record as conscientious objectors (COs) to armed service during the First World War. This figure does not include men who may have had anti-war sentiments but were either unfit, in reserved occupations, or had joined the forces anyway. The number of COs may appear small compared with the six million men who served, but the impact of these men on public opinion and on future governments was to be profound.

Broadly speaking there were four reasons why men objected to armed service during the First World War. The most common ground was a religious one. Pacifism was a time-honoured tenet of the Society of Friends (Quakers), although some Quaker men did enlist. Other individuals, including Christian fundamentalists, took the Bible at its word: ‘Thou shalt not kill’. The next largest group of COs were political activists of the left who saw the First World War as an imperialist war and as an example of the ruling classes making a war that the workers had to fight.

The left was split over support for the war and those who opposed it on the radical left were not necessarily pacifists – they reserved the right to fight for a cause in which they believed. Thirdly, there were those who might be termed ‘humanists’, who felt it wrong to kill but not on religious grounds. A former naval rating, for example, had worked as a butcher and became a conscientious objector because, as he said, ‘l know what it is to kill a pig – I won't kill a man’ (IWM SR 784). The fourth group were those who generally objected to government intervention in their lives; some thought the war had nothing to do with them personally but might have fought if they felt the United Kingdom was directly threatened.

The usual procedure for a CO was to apply to his local tribunal for exemption from military service. Here, Walter Griffin describes a particular line of questioning used at the tribunals. Made up of local prominent figures, the tribunals had been set up earlier to decide on exemptions under the unsuccessful Derby Scheme. They were therefore available after conscription was introduced to assess a CO’s conviction and sincerity. The tribunals’ members were poorly briefed and in many cases merely used the hearings to state their own views. One of IWM’s interviewees was asked his age and, on hearing that he was eighteen, the tribunal chairman said: ‘Oh in that case you're not old enough to have a conscience. Case dismissed’. The CO was sent to prison. At the tribunal's discretion exemption could be absolute, from combatant service only, or conditional on undertaking work of national importance; but COs were frequently rejected by the local tribunal or offered an unacceptable position. They could then go before an appeals tribunal and if they were refused again they could appeal to the Central Tribunal in London. Once a CO was refused exemption, he was considered to have enlisted into military service.

A problem for the CO was determining where to draw the line in his stance and whether there was a difference in principle between combatant and non-combatant service. Some COs would take on alternative civilian work or enter the military in non-combatant roles in the Royal Army Medical Corps or Non-Combatant Corps, for example. COs in prison were offered so-called ‘work of national importance’ in a scheme put forward by the Home Office. This was generally agriculture, forestry or unskilled manual labour. Other conscientious objectors - known as 'absolutists' - refused to do any war-related work or obey military orders.

In practice, having been rejected on appeal a CO was a soldier absent without leave and as such was subject to arrest. COs who entered military service were also arrested for refusing to obey military orders. Over one-third of the 16,000 COs went to prison at least once, including the majority of absolutists who were imprisoned virtually for the duration. At first, COs were sent to military prisons because they were considered to be soldiers. It was a minor triumph for the anti-conscription movement when a mid-1916 Army order ruled that COs who had been court martialled were to be sent to civil prisons. The initial standard sentence was 112 days third division hard labour - the most severe level of prison sentence under English law at that time. This began with one month in solitary confinement on bread and water, performing arduous and boring manual jobs like breaking stone, hand-sewing mailbags and picking oakum. With good conduct remission, most COs served about three months.

However, after being released a CO could be immediately arrested again as a deserter, court-martialled and returned to prison. This ‘Cat and Mouse’ treatment had been previously used on the Suffragettes, and as the war went on sentences handed down to COs increased. Over the course of the war, some conscientious objectors were actually taken with their regiments to France, where one could be shot for refusing to obey a military order. Thirty-four were sentenced to death after being court martialled but had their sentences commuted to penal servitude. Here, Howard Marten talks about military field punishments and the outcome of his court martial in France.

When Harold Bing was in Winchester Prison, there was one wing for male criminal prisoners, one for women and two for conscientious objectors. The conditions for COs were exactly the same as those for criminal prisoners, but COs did succeed in getting prisons to offer a vegetarian diet. Vegetarianism was common among COs, as it had an obvious affinity, particularly with humanitarian pacifism. CO prisoners were allowed a very limited number of censored letters, though one of the COs interviewed by IWM said ‘filling the notepaper was quite an art’ because there was nothing to say after months or years in prison. They had no calendars, no newspapers, and few visits – those visits they did receive were through a grille. They were limited to a few books from the prison library at infrequent intervals, but after a while COs were allowed to have books sent in under the condition that they donate them to the prison library once finished with them. Later CO prisoners were impressed to find prison libraries stocked with titles by William Morris, Sidney and Beatrice Webb and other writers of the left. Here, Bing recalls the constrained and degrading conditions of prison life.

Severe physical brutality towards all COs seems to be a First World War myth. Certainly several of IWM’s interviewees experienced or witnessed very harsh treatment and 73 COs died as a result of physical abuse. The primary punishment - in many cases the most severe - was psychological rather than physical. The most fortunate COs were those who could devise ways to cope with loneliness, doubt, depression and loss of ability to concentrate. Some COs took an active role in challenging the situation in which they found themselves. Some participated in covert activity, described here by Harold Bing. Others coped through mental exercise. One of the COs interviewed by IWM, a musician, played an imaginary piano on his knees and even did some composition. Some COs learned Esperanto, many recited poetry from memory, and several went on long, imaginary, remembered walks.

Some COs openly resisted the system, as described here by Fenner Brockway. Work and hunger strikes were held by COs including Clifford Allen (later Lord Allen of Hurtwood), chairman of the No-Conscription Fellowship, and Sir Francis Meynell. For many COs, the pressures and hardships strengthened their resolve.

Whether in prison or not, COs and their families did have a common experience in many respects, especially from the pressures they felt from society. Britain's public support for the war was almost unanimous and society tended to view men who would not fight - and the men and women who supported them - with suspicion and loathing.

To become a conscientious objector in 1916 was a difficult decision, which apparently involved rejecting the whole of conventional British society and everything it stood for. Wartime domestic propaganda made it all too plain that a person was either with the national effort or against it; and if against it, he was by implication either not concerned with the sacrifices of others or was undermining their willingness to serve. The conscientious objector was trapped psychologically: he felt guilty if he shared the soldiers’ ordeal and guilty if he did not. COs were not released until about six months after the end of the war, in order to give most soldiers a head-start when looking for jobs. They were also stripped of the right to vote until 1926. With time most did find a way to fit back into society - some very successfully. None of the COs interviewed by IWM appeared to feel any bitterness about their treatment, but they seem to remain, through their First World War experiences, permanently set apart.