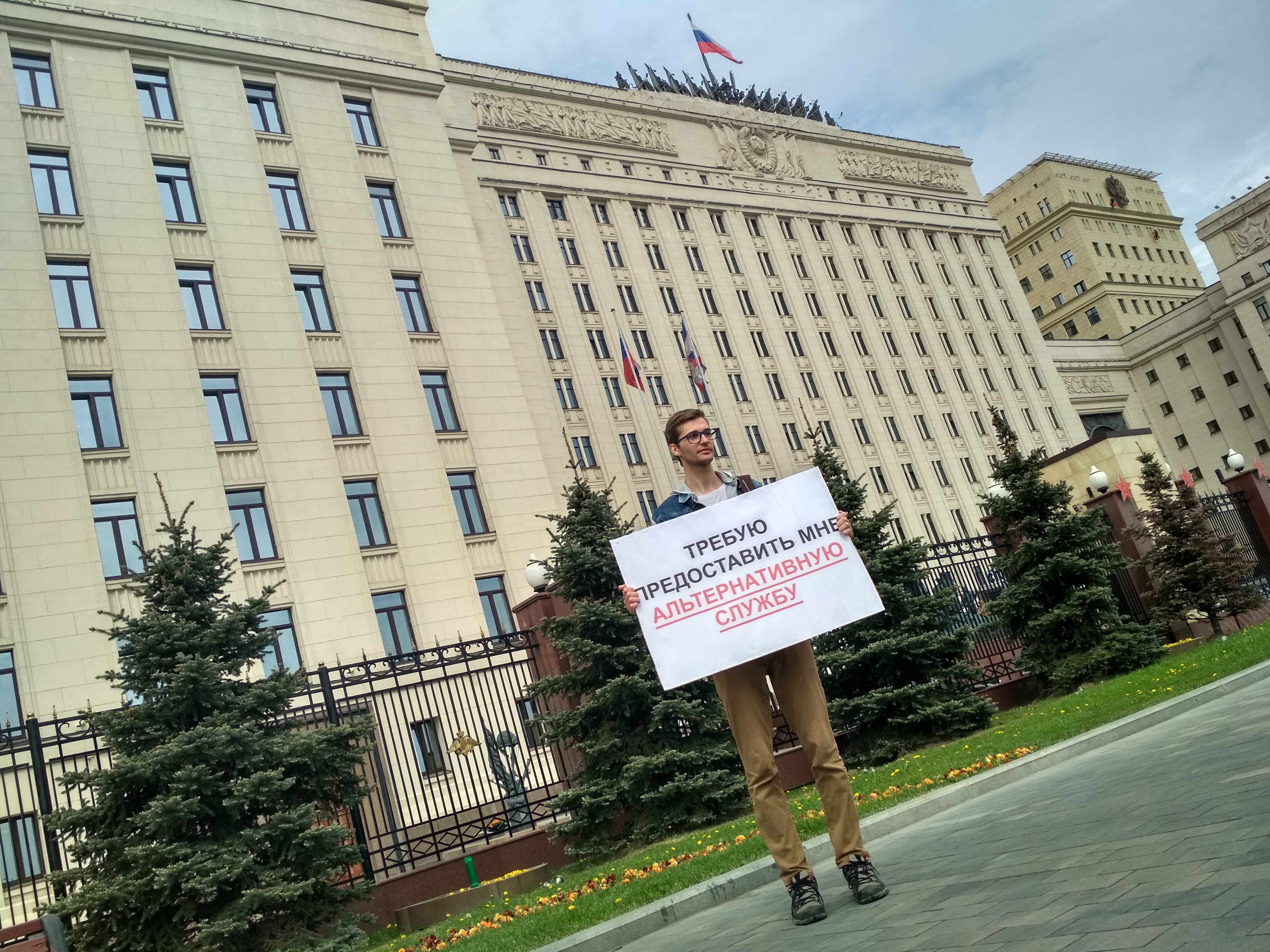 For more than two years, Maxim Bardadim sought from both the enlistment commission and the Russian judicial instances recognition of his constitutional right to Alternative Civil Service. When it went in the third circle, he no longer hoped that he could “punch through this wall” and for himself decided to just stand for his right to the end. His perseverance gave an unexpected result.

Maxim entered “Moskovskii avtomobilno-dorojnii gosudarstvennii tehnicheskii universitet”, where he studied in the military department, since at that time he was thinking about the possible future an officer. However, he soon expelled from there of his own accord, despite the fact that at the end of the military department he could get an exemption from military service. This act was caused by the fact that Maxim had convictions that were incompatible with many obligations envisaged for students in the military department. Maxim realized that military service became unacceptable for him.  He changed the direction of education from engineering to sociological and filed an application for the replacement of military service with Alternative Civil Service, due to the presence of his anti-war beliefs.

Despite the applicant’s compliance with all legal regulations, the enlistment commission denied Maxim the right to an Alternative Civil Service, referring to the fact that he allegedly "did not provide convincing reasons and circumstances" and "reasonable data that military service is contrary to the conviction of a conscript."

Maxim appealed the illegal decision of the draft board to the court, but all the courts up to the Supreme Court of the Russian Federation did not recognize his right to Alternative Civil Service, also referring to the fact that he “did not provide indisputable evidence to substantiate his arguments”. Moreover, the Moscow Regional Court, in its appeal determination, concluded that “Performance of military service does not contradict the principles of humanism and the preservation of all life on earth, not dissonant with the knowledge of chemistry, biology, psychology, passion for tourism and an activism.”

Six months later, Maxim filed a second application for the replacement of military service with Alternative Civil Service to military registration and enlistment office. The enlistment commission again refused him on the same basis, and Maxim again appealed the decision in court, which, in turn, he refused for the same reason, which, in turn, refused him for the same reason – “He did not provide the court with indisputable evidence in support of his arguments”.

In December 2017, together with the human rights organization “Soldiers’ Mothers of Saint-Petersburg” and Human Rights Initiative “Grajdanin i armiya”, Maxim filed a complaint to the European Court of Human Rights (not been yet accepted for considered).

On May 14, 2018, Maxim took place another enlistment commission, which again refused him the right to alternative service.

However, Maxim then noted a certain positive shift, which encouraged him:

- This whole long story has taught me a lot, including the fact, that if you talk - you will be heard.

Yesterday, at a meeting of the enlistment commission, I managed to achieve, albeit small, but victory - one member of the enlistment commission abstained from voting neither “for”, nor “against”, and finally, my military service registration certificate was returned to me, which I have demanded for two years! Of course, i could find "easier" ways: hide from the military registration and enlistment office, go abroad, or buy a military identity card, but what's the point then in the Constitution? What is the point of talking about justice and freedom, not defending them? If people do not claim their rights, no one will follow these rights, and in order to realize what our state really is, - to try to state any convictions (no matter political, religious, philosophical, humanistic them), and see, what they answer you in court.

May 15, the International Day of conscientious objector, Maxim held a single picket (https://realarmy.org/prizyvnik-potreboval-u-zdaniya-minoborony-rf-predostavit-emu-ags/) outside the Russian Ministry of Defense building demanding the observance of constitutional norms and the cessation of violations of his right to alternative civilian service.

“What I just did not encounter during this time ... How many people considered my perseverance to be meaningless and useless, someone was insulting me directly and even stopped communicating with me, but some people supported me and helped, for which I am very grateful to them” - Maxim wrote on his page on FB.

Maxim is very grateful to the people and organizations, that supported him and helped him throughout this time: Human Rights Initiative “Grajdanin i armiya”, Arsenii Levinson, Sergei Krivenko, organization “Soldiers’ Mothers of Saint-Petersburg”, Aleksandr Peredruk, organization “Moskovskaya Otkritaya Shkola Prav Cheloveka”, familiars from Baltic Glory (https://realarmy.org/mirnye-ucheniya-baltic-glory/), “Moskovskaya Helsinkskaya Gruppa”, Human Rights Center Memorial, the best friend Artem Aksyute, and many of his other acquaintances, who supported him.

In his post on FB, Maxim also addressed those people who do not understand him, do not share his position:

- Friends, I do not consider myself a hero or "the most intelligent". I just have certain views that are of great importance to me. I tried to get Alternative Civil Service, not because I have nothing to do, but because I simply cannot do otherwise. I know that it was possible to simplify my task and declare, for example, not about anti-patriotic convictions, but simply pacifist, attaching with a certificate from some religious organization, but that is the essence of beliefs, for me to go against them is tantamount to hypocrisy. I wanted to perform Alternative Civil Service not to “get out” or “make your way easier,” and simply because military service is unacceptable for me. <…>

Among my close acquaintances there are people, who do not share my views, but at the same time, they just respect my position and I respect their position. I am ready to support a person if he is somehow discriminated against, if his freedoms have been violated, even if we do not share the views of each other. I do not force anyone to refuse military service, or to go to court at the first desire, i urge only to respect the position and freedoms of the other person, in order to be tolerant and peaceful of a position that is different from yours.

Each time the secretary in the military registration and enlistment office, which I brought a new application for the replacement of military service with Alternative Civil Service five times, asked me a question like: "And who will defend your homeland?" "And if the enemy attacks?"

What is the enemy? Where is the enemy? Personally, I have no enemies. Maybe the military registration and enlistment office has enemies there, I don’t. I have friends from different parts of the globe, and I'm not going to fight with them.

I urge you to be more critical of your convictions and the fact that for some reason it is customary in society to call it “the norm.” I'm not afraid to change my mind or say that I was wrong. I'm afraid to be silent and do nothing. I am ready to consider your reasoned position in the comments.