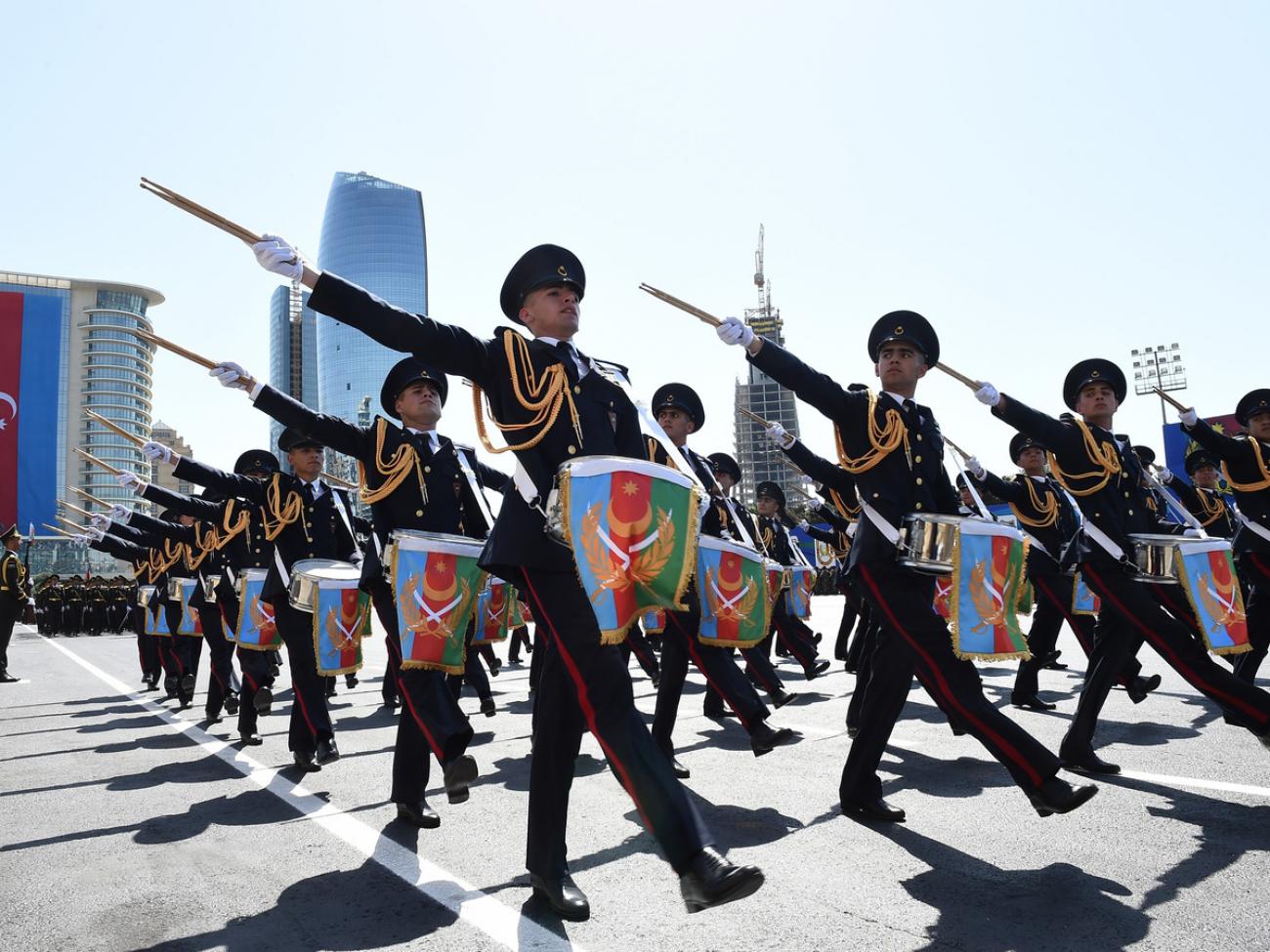 18-year-old Emil Mehdiyev, a Jehovah's Witness from Azerbaijan, repeatedly expressed willingness to perform a civilian alternative to compulsory military service. Instead, he was given a criminal conviction, a one-year suspended prison term, and will be under probation for one year. Seven similar criminal cases against other young men are with Prosecutor's Offices.

Emil Mehdiyev has appealed to Ganca Appeal Court against his criminal conviction for refusing compulsory military service on grounds of conscience. The Court received the appeal on 27 August and is yet to set a date for the hearing.

The lower court sentenced Mehdiyev to a one-year suspended prison sentence. During the year, he will be under the control of the probation service and will not be allowed to change his place of residence or travel abroad without permission. He will also have a criminal record.

Jehovah's Witnesses say Prosecutor Rahman Ibrahimov called in court for Mehdiyev to be jailed for one year, though he denied this to Forum 18.

Although Barda District Court convicted Mehdiyev on 6 July, the Judge refused – with no explanation - to issue the verdict in writing until August.

The government's Human Rights Ombudsperson's Office in Baku refused to discuss with Forum 18 what it has done (if anything) to end the punishment of conscientious objectors like Mehdiyev and to push for the country to introduce a civilian alternative to compulsory military service (see below).

Azerbaijan promised the Council of Europe on accession in 2001 that it would adopt a law on alternative service "in compliance with European standards" by January 2003. It has never adopted such a law (see below).

The new prosecutions come as the European Court of Human Rights in Strasbourg is expected to deliver decisions over five Jehovah's Witness conscientious objectors convicted in Azerbaijan between 2007 and 2013. Four of these were jailed. The Court completed its correspondence with the Azerbaijani government over the cases in 2017 (see below).

No action from Ombudsperson's Office

Forum 18 tried to find out what (if anything) the government's Human Rights Ombudsperson's Office has done to pressure the government to end the punishment of conscientious objectors such as Emil Mehdiyev and to introduce a civilian alternative to compulsory military service.

No one was available to talk, the Ombudsperson's Office told Forum 18 from Baku on 29 August, so Forum 18 had to send its questions in writing. No reply had been received by the end of the working day in Baku.

The only known case of a conscientious objector the Ombudsperson's Office has taken up was over a threatened prosecution in Baku in 2004. "Following the intervention of the Ombudsman the requirements of the legislation were explained to military policemen, the complainant was set free and his right to freedom was restored," its annual report for 2004 noted.

No subsequent Ombudsperson's Office annual report mentions any of the prosecutions of conscientious objectors, or any action to propose the introduction of an alternative civilian service.

The Sub-Committee on Accreditation of the Global Alliance of National Human Rights Institutions downgraded Azerbaijan's Human Rights Ombudsperson's Office from A to B status, a decision that took effect from 8 August.

The Sub-Committee noted that the Ombudsperson's Office "has not adequately spoken out in a manner that effectively promotes protection for all human rights, including in response to credible allegations of human rights violations having been committed by government authorities. The failure to do so demonstrates a lack of sufficient independence."

Azerbaijan repeatedly breaks its international human rights obligations. Ahead of its accession in January 2001 to the Council of Europe, the country formally promised "to adopt, within two years of accession, a law on alternative service in compliance with European standards and, in the meantime, to pardon all conscientious objectors presently serving prison terms or serving in disciplinary battalions, allowing them instead to choose (when the law on alternative service has come into force) to perform non-armed military service or alternative civilian service".

The Council of Europe's Venice Commission – of which Azerbaijan is a member - has repeatedly criticised the country's failure to meet its commitment to introduce a genuine civilian alternative to compulsory military service (see F18News 16 October 2012 http://www.forum18.org/archive.php?article_id=1755 ).

Similarly, the Council of Europe's European Commission against Racism and Intolerance (ECRI) in March 2016 again condemned Azerbaijan's violations of freedom of religion or belief, and other human rights, and noted the continuing sentencing of conscientious objectors. "ECRI strongly recommends that the authorities fulfil the undertaking given upon accession to the Council of Europe to enact legislation on alternatives to military service" (see ).

The government claimed in its response to ECRI that "due to the war with Armenia, Azerbaijan has not been able to enact a separate law on alternative service".

In 2018, ECRI began its follow-up procedure on two concerns in Azerbaijan, including the country's failure to introduce an alternative, civilian service.

In November 2016 Concluding Observations on Azerbaijan's report to the United Nations (UN) Human Rights Committee (CCPR/C/AZE/CO/4), the Committee again expressed concern about the lack of a civilian alternative to military service.

The Committee stated that Azerbaijan "should adopt without delay the legislation necessary to give effect in practice to the constitutionally recognized right to conscientious objection to military service, without limitation on the category of conscientiously held beliefs. Moreover, it should provide for alternative service of a civilian nature for conscientious objectors and repeal all sanctions against them."

However, Azerbaijan has still not halted its prosecution of conscientious objectors, or introduced a civilian alternative service for those who cannot perform compulsory service in the armed forces on conscientious grounds.

Five Jehovah's Witnesses punished through the courts between 2007 and 2013 for refusing compulsory military service are awaiting decisions in their appeals to the European Court of Human Rights (ECtHR) in Strasbourg. Azerbaijan is subject to the ECtHR's decisions as a member of the Council of Europe.

All five – four of whom were jailed - were among Jehovah's Witness young men to have been convicted under Criminal Code Article 321.1 ("Evasion without lawful grounds of call-up to military service or of mobilisation") since Azerbaijan joined the Council of Europe in 2001.

Kamran Mirzayev was jailed for nine months by Goychay Court in March 2013, but was amnestied in June 2013 after serving three months' imprisonment. The Supreme Court rejected his final appeal in February 2015 (see F18News 14 May 2015 http://www.forum18.org/archive.php?article_id=2061 ).

Mushfiq Mammadov was given a suspended six month prison term by Baku's Sabail District Court in July 2006. He was tried on the same charges again in October 2009, by which time he was aged 26. At the end of his second trial, taking account of the two months he had spent in pre-trial detention, the judge handed down a fine of 250 Manats. The Supreme Court rejected his final appeal in December 2010 (see F18News 22 February 2011 http://www.forum18.org/Archive.php?article_id=1544 ).

Farid Mammadov was jailed for nine months by Baku's Nasimi District Court in July 2010, but was not imprisoned until September 2010 when his first appeal failed. The Supreme Court rejected his final appeal in January 2011 (see F18News 22 February 2011 http://www.forum18.org/Archive.php?article_id=1544 ).

Fakhraddin Mirzayev was jailed for one year by Gyanja's Kapaz District Court in September 2012, but was amnestied in May 2013 after eight months' imprisonment. The Supreme Court rejected his final appeal in June 2013 (see F18News 28 June 2013 http://www.forum18.org/archive.php?article_id=1852 ).

The Court is likely to rule that the five men's human rights were violated, in line with other recent decisions in conscientious objector cases.

In a case against neighbouring Armenia, the ECtHR ruled in July 2011 (Application no. 23459/03) that the state's refusal to offer Vahan Bayatyan an alternative to compulsory military service and punishment of him for refusing to serve in the armed forces violated his rights under Article 9 ("Freedom of thought, conscience and religion") of the European Convention for the Protection of Human Rights and Fundamental Freedoms (ECHR) (see F18News 7 July 2011 http://www.forum18.org/archive.php?article_id=1591 ).

This is a shortened version of an article first published on 29 August 2018 by Forum 18 News Service on http://www.forum18.org . You can reach the full article here .